18 Tiny Deaths: The Untold Story of Frances Glessner Lee and the Invention of Modern Forensics (Hardcover) 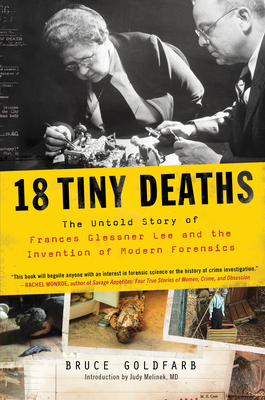 18 Tiny Deaths: The Untold Story of Frances Glessner Lee and the Invention of Modern Forensics (Hardcover)

A captivating blend of history, women in science, and true crime, 18 Tiny Deaths tells the story of how one woman changed the face of forensics forever.

Frances Glessner Lee, born a socialite to a wealthy and influential Chicago family in the 1870s, was never meant to have a career, let alone one steeped in death and depravity.

Yet she developed a fascination with the investigation of violent crimes, and made it her life's work. Best known for creating the Nutshell Studies of Unexplained Death, a series of dollhouses that appear charming—until you notice the macabre little details: an overturned chair, or a blood-spattered comforter. And then, of course, there are the bodies—splayed out on the floor, draped over chairs—clothed in garments that Lee lovingly knit with sewing pins.

18 Tiny Deaths, by official biographer Bruce Goldfarb, delves into Lee's journey from grandmother without a college degree to leading the scientific investigation of unexpected death out of the dark confines of centuries-old techniques and into the light of the modern day.

Lee developed a system that used the Nutshells dioramas to train law enforcement officers to investigate violent crimes, and her methods are still used today.

The story of a woman whose ambition and accomplishments far exceeded the expectations of her time, 18 Tiny Deaths follows the transformation of a young, wealthy socialite into the mother of modern forensics...

"A captivating portrait of a feminist hero and forensic pioneer." —Booklist

A former EMT/paramedic and a nursing school dropout, Bruce Goldfarb has written for national and local newspapers, magazines, and web publications. He also wrote and edited several medical texts and reference books. This is his first book of popular nonfiction. He lives in Baltimore, Maryland.

"An engrossing and accessible chronicle of Frances’s life and the early years of scientific detection." — The Wall Street Journal

"Goldfarb’s unprecedented access to her family’s papers has enabled him not only to paint a full picture of Glessner Lee’s life and background but also to uncover less well-known aspects of her impact on the development of forensic science....Although her career was bedeviled by setbacks, as Goldfarb ably demonstrates, Frances Glessner Lee made a real and lasting contribution to forensic science and medicine." — Science

"Journalist Goldfarb takes an eye-opening look in his fascinating biography at the crucial role played by heiress Frances Glessner Lee in the development of U.S. scientific crime examination...Goldfarb’s storytelling gifts will lead readers of insightful true crime to hope he will write more in the field. Devotees of TV’s CSI will have their minds blown." — Publishers Weekly, STARRED review

"18 Tiny Deaths combines elements of women's history and police procedurals in a story that will intrigue fans of both genres." — Shelf Awareness for Readers

"Thorough research helps him paint a captivating portrait of a feminist hero and forensic pioneer. " — Booklist

"A culmination of years of historical research using primary sources, including the papers of Frances Glessner Lee herself. It is the story of how one stubborn, intelligent, creative, and self-taught woman could immerse herself in a passion that had immense repercussions in the fields of both medicine and the law… As this absorbing and evocative book will show you, Frances Glessner Lee should be recognized as the matriarch of the modern practice of forensic pathology." — Judy Melinek, M.D., co-author of Working Stiff

"Frances Glessner Lee's dioramas of death have long been objects of fascination; now Bruce Goldfarb, the man who knows them best, has written a definitive account of how they came to be, and of the compelling, complex woman who created them. This book will beguile anyone with an interest in forensic science or the history of crime investigation." — Rachel Monroe, author of Savage Appetites: Four True Stories of Women, Crime, and Obsession