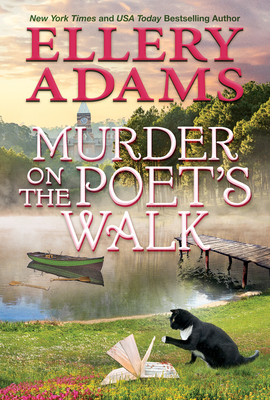 This is book number 8 in the A Book Retreat Mystery series.

For bibliophiles who love Rita Mae Brown and Alexander McCall Smith comes the latest witty story in the beloved series set at Virginia’s book-themed resort, Storyton Hall, from the New York Times bestselling author. In this latest literary mystery, a killer inspired by Lord Alfred Tennyson’s “The Lady of Shallot” doesn’t stanza chance with resort manager Jane Steward is on the case!

When corpses clutching poems begin turning up around Storyton Hall, Jane Steward is on the trail of someone exercising poetic license to kill and is determined to keep her fairytale resort from turning into a southern gothic…

As Jane eagerly anticipates the wedding of her best friend Eloise Alcott, Storyton Hall is overrun with poets in town to compete for a coveted greeting card contract. They’re everywhere, scrawling verses on cocktail napkins in the reading rooms or seeking inspiration strolling the Poet’s Walk, a series of trails named after famous authors. But the Tennyson Trail leads to a grim surprise: a woman’s corpse drifting in a rowboat on a lake, posed as if she were “The Lady of Shallot.”

When a second body is discovered,also posed as a poetic character, a recurring MO emerges. Fortunately, Jane is well versed in sleuthing and won’t rest until she gives the killer a taste of poetic justice…
Ellery Adams is the New York Times bestselling author of two cookbooks and over thirty mysteries, including the Book Retreat Mysteries, The Secret, Book, & Scone Society series, the Books by the Bay Mysteries, and the Charmed Pie Shoppe Mysteries. A native New Yorker, she has had a lifelong love affair with stories, food, rescue animals, and large bodies of water. When not working on her next novel, she reads, bakes, gardens, spoils her three cats, and rearranges her bookshelves. She lives with her husband and two children in Chapel Hill, NC. For more information and lists of bibliotherapy suggestions, please visit ElleryAdamsMysteries.com or YourBookRX.com.

Praise for Murder on the Poet's Walk

“Readers will enjoy the plot twists and the literary frame.” —Booklist