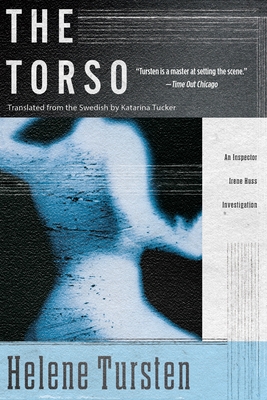 This is book number 3 in the An Irene Huss Investigation series.

A partial torso washes up on a Swedish beach, so mutilated that gender is only established through DNA testing. Detective Inspector Irene Huss of the Göteborg Police liaises with her Danish counterparts, who have a similar unsolved murder in their files. But when people connected to Irene start turning up dead, she fears she might be next.
Helene Tursten was a nurse and a dentist before she turned to writing. Other books in the Irene Huss series include Detective Inspector Huss, Night Rounds, The Glass Devil, The Golden Calf, The Fire Dance, and The Beige Man. Her books have been translated into 18 languages. She was born in Göteborg, Sweden, where she now lives with her husband and daughter.
Praise for The Torso

“The scenes in which Huss tracks her killer through the underbelly of Copenhagen are as good as Louise Welsh’s similarly creepy tour of Glasgow in The Cutting Room.
—Entertainment Weekly

"These days Scandinavian crime writers are thick on the ground . . . It's nice to see that the women can be just as bloodthirsty as the men."
—The New York Times Book Review

“[Tursten] is a master at setting the scene, detailing a foreign milieu until it feels familiar. She juggles a large cast of characters with aplomb.”
—Time Out Chicago

“One of the better examples of the Swedish crime fiction invasion.”
—The Baltimore Sun

"A fascinating glimpse of cultural dynamics in Scandinavia, this is an absorbing, character-driven series . . . The writing is spare, vivid and atmospheric. This is a series for readers who like procedurals with a strong psychological component."
—Portsmouth Herald

“Spins a good story . . . this is a solid police procedural.”
—Library Journal