To the End of the World: Nathanael Greene, Charles Cornwallis, and the Race to the Dan (Hardcover) 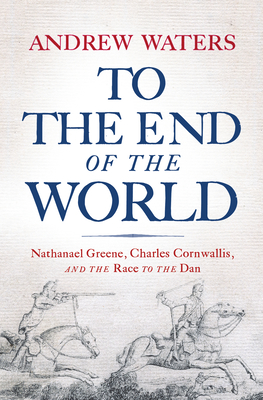 To the End of the World: Nathanael Greene, Charles Cornwallis, and the Race to the Dan (Hardcover)


Backordered: Email or call for availability status
A Stranded American Army, a Relentless Enemy, and a Thrilling Pursuit and Escape that Changed the Outcome of the American Revolution
“In the most barren inhospitable unhealthy part of North America, opposed by the most savage, inveterate perfidious cruel Enemy, with zeal and with Bayonets only, it was resolv’d to follow Green’s Army, to the end of the World.” So wrote British general Charles O’Hara about the epic confrontation between Nathanael Greene and Charles Cornwallis during the winter of 1780-81. Only Greene’s starving, threadbare Continentals stood between Cornwallis and control of the South—and a possible end to the American rebellion. Burning their baggage train so that they could travel more quickly, the British doggedly pursued Greene’s bedraggled soldiers, yet the rebels remained elusive. Daniel Morgan’s stunning victory at Cowpens over a superior British force set in motion the “Race to the Dan,” Greene’s month-long strategic retreat across the Carolinas. In constant rain and occasional snow, Greene’s soldiers—tracking the ground with their bloody feet—bound toward a secret stash of boats on the Dan River. Just before Cornwallis could close his trap, the Continentals crossed into Virginia and safety. Greene’s path featured three near-miss river escapes, the little-known Battle of Cowan’s Ford, and a final chase so close that the fate of the American South—and the American effort—rested on one wrong British move.
With a background section on the Southern theater in 1780, and a summary outlining the lives and careers of its important officers, To the End of the World: Nathanael Greene, Charles Cornwallis, and the Race to the Dan is a carefully documented and beautifully written account of this extraordinary chapter of American history. The book not only showcases the incredible dramatics of the American Revolution’s “Great Escape,” but also provides a compelling look at the psychological and intellectual distinctions between its two great generals, Greene and Cornwallis.
Andrew Waters is a writer, editor, and conservationist. He is the author of The Quaker and the Gamecock: Nathanael Greene, Thomas Sumter, and the War for the Soul of the South and editor of Battle of Cowpens: Contemporary and Primary Accounts. His writing has appeared in Wake Forest University Magazine, North Carolina Literary Review, and other journals. He has a BA from the University of North Carolina, Chapel Hill, an MBA from University of North Carolina, Greensboro, and is pursuing a PhD at Clemson University. He lives in Spartanburg, South Carolina, with his family.
“Waters succeeds in relating the rousing story of the Southern Campaign. Readers will appreciate his disclosure of the deep background of people and military events. He seeds the tale with extensive and detailed biography. His work is not merely a descriptive narrative but an insightful analysis. Waters does not shrink from judgment, not only of wartime leaders, but also of their biographers and other historians of this sphere of the Revolution. This book is highly recommended for those interested in the Revolution as it was fought in the Southern states.”—Journal of America’s Military Past

“To the End of the World is a welcome addition to the growing number of publications devoted to the American Revolution in the South. It is a well-researched and well-written account of a seldom-told story of a significant event in the Southern Campaign—General Nathanael Greene’s “Race to the Dan.”—Walter Edgar, author of Partisans and Redcoats
“This thoroughly researched, balanced, and engagingly written volume is the first book-length study of one of the Revolutionary War’s crucial campaigns, and will appeal to general readers as well as providing a resource for scholars.”—Jim Piecuch, author of The Battle of Camden: A Documentary History