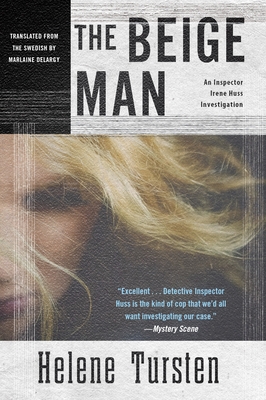 This is book number 7 in the An Irene Huss Investigation series.

A speeding BMW leaves a dead pedestrian in its wake and leads police to the corpse of a young girl in a cellar. Detective Inspector Irene Huss's ensuing investigation draws her into the chilling world of sex trafficking.

Göteborg, Sweden: The high-speed chase of a stolen BMW takes a chilling turn when the two police officers involved witness a gruesome hit-and-run. When they finally recover the abandoned vehicle, search dogs are unable to trace the thieves, but they do uncover an entirely different horror: the half-naked corpse of a young girl in a nearby root cellar.

As Detective Inspector Irene Huss and her colleagues struggle to put the pieces together, they discover the man whose car was stolen—a retired police officer—is none other than the victim in the hit-and-run. Could it be a strange coincidence? Or is something larger at play? Meanwhile, the hunt for the girl’s killer leads Irene into the dark world of sex trafficking. An international criminal has arrived in Göteborg, and he’ll stop at nothing to expand his sinister operation.
Helene Tursten was a nurse and a dentist before she turned to writing. Other books in the Irene Huss series include Detective Inspector Huss, Night Rounds, The Torso, The Glass Devil, The Golden Calf, The Fire Dance, and The Treacherous Net. Her books have been translated into 18 languages. She was born in Göteborg, Sweden, where she now lives with her husband and daughter.
Praise for The Beige Man

"The cast of characters is a colorful array, each officer vividly and individually drawn . . . Thoroughly engaging and convincingly unraveled."
—Pittsburgh Post-Gazette

“Fans of Henning Mankell and Jo Nesbø are sure to enjoy this novel, and though it's not the first book in the series, readers new to Tursten's work can enjoy it without any difficulty.”
—Shelf Awareness

“Helene Tursten never disappoints. Fans of police procedurals will want to acquaint themselves with this superior series, quickly and completely.”
—Bookreporter.com

"The Beige Man is a strong entry in this series."
—Mysterious Reviews

“Helene Tursten's police procedural series, set in Göteborg, Sweden's second-largest city, does a good job of straddling the line between dark, gritty realism and a more lighthearted and hopeful view of the world.”
—Reviewing the Evidence

"Fans of Henning Mankell and Håkan Nesser will enjoy Tursten. For readers new to the series, there is no need to start at the beginning. Allow yourself time, this can be easily read in one sitting."
—Library Journal, Starred Review

"Effectively puzzling till the final pages, rewardingly logical in its conclusion: One of Irene's best."
—Kirkus Reviews

"Tursten again masterfully blends a well-paced procedural with a broader social issue and the personal lives of members of the Göteborg, Sweden, police force. Superior Scandinavian crime fiction with a feminist bent."
—Booklist

“Truly puzzling . . . and Huss is interesting whether she's at home or on the job.”
—Kittling Books

"Stockholm gets all the press, but Gothenburg brings in the tourists with its annual film festival and largest port in the Nordic countries. Who needs that girl with the dragon tattoo when Swedish best-seller Tursten is on the case?"
—Fisher Island Magazine

"These days Scandinavian crime writers are thick on the ground. It's nice to see that the women can be just as bloodthirsty as the men."
—The New York Times Book Review

"[Tursten] imbues this novel with a cold chill of dread that can't be attributed only to the subfreezing temperatures of Göteborg in winter."
—Chicago Sun Times