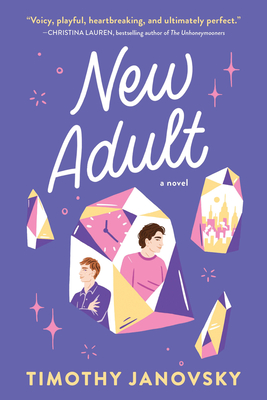 
Unavailable
Not Yet Published

Nolan Baker longs to be "thirty, flirty and thriving" in this charmingly quirky LGBTQIA+ romance that's one part 13 Going on 30 and one part One Last Stop.

WHY CAN'T WE SKIP TO THE GOOD PART?

Twenty-three-year-old Nolan Baker wants it all by the time he's thirty. Too bad he's single, barely able to cover his own expenses, and still paying his dues at a prominent NYC comedy club. When faced with his perfect sister's wedding, Nolan takes it as a wakeup call. It's time to quit comedy and make good on his practical dreams—most importantly, asking Drew Techler, his best friend, to be his date.

But right as Nolan is about to give it all up, he's asked to fill a last-minute spot for a famous comedian. Score! He crushes his set, but stands Drew up, misses his sister's big day, and disappoints his entire family. After major blowouts with everyone he loves, Nolan desperately wishes on a set of gift "magical healing crystals" to skip to the good part of life. When he wakes the next morning, it's seven years later, he's a successful comedian, and he has everything he always thought he wanted. Everything, that is, except his friends and family, none of whom are taking his future self's calls.

With nowhere else to turn, Nolan sets out to find the only person he trusts to help. Except Drew is all grown up now, too. He's hot, successful…and hates Nolan's guts. As Nolan works to get back to his younger self—and the life he so carelessly threw away—he'll have to prove he's not the man everyone thinks they know in order to regain Drew's trust, friendship, and maybe, ultimately, his heart.

While part of a series, this book stands alone.

People Are Raving About Timothy Janovsky:

"This book made my queer heart so very full and deeply happy."—Anita Kelly

"A cinematic daydream guaranteed to steal your heart."—Julian Winters

"Full of hope and heart."—Alexandria Bellefleur

"[A] fresh, sweet, and swoony love story that blends coming-of-age comedy with the nuances of exploring sexual identity."—Alison Cochrun

Timothy Janovsky is a queer, multidisciplinary storyteller from New Jersey. He holds a bachelor’s degree from Muhlenberg College and a self-appointed certificate in rom-com studies (accreditation pending). When he’s not daydreaming about young Hugh Grant, he’s telling jokes, playing characters, and writing books. He’s the author of Never Been Kissed and You’re a Mean One, Matthew Prince. Follow him on social media for more.