The Forensic: How the CIA, a Brilliant Attorney and a Young CPA Brought Down Howard Hughes (Paperback) 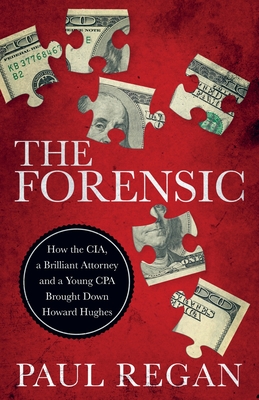 The Forensic: How the CIA, a Brilliant Attorney and a Young CPA Brought Down Howard Hughes (Paperback)

"A great story and a primer on smart, creative lawyering and deep-dive forensic accounting. John Clark and Paul Regan school Howard Hughes on how to bring down even the wealthiest, most stubborn opponent."

Extreme wealth seems to always have a dark side, such as the victims of jaw-dropping inequality. There is much debate if billionaires should even exist because politicians and policies are up for sale at prices that only the 1 percent can actually afford to pay. Rarely do we hear stories of justice concerning the richest people of all time. In this unique memoir, American business tycoon, movie director and aviator Howard R. Hughes Jr. and his pugnacious attorney, Chester Davis, were taken down by a brilliant and passionate attorney, John Bales Clark, and a diligent and talented young CPA, Paul Regan. Clark and Regan were dedicated to restoring what was wrongfully taken from their clients by Hughes and Davis.

This story evolves into a contest fought by Clark and Regan as they unraveled an injustice perpetrated by Hughes and Davis on the shareholders of Air West, Inc. Along this journey, there was a parallel track involving the CIA, the Department of Justice and a Soviet submarine carrying nuclear missiles. The connection between Clark and Regan's journey, the CIA, and the Soviet submarine was coincidental; however, without that connection, their careers may not have been as golden as they became. This secret connection, and Clark and Regan's efforts to use it to bring down Howard Hughes, have been told to only a very few, until The Forensic.

"It's hard to believe that an accountant can write a book about accounting and have it be a page-turner, but that's exactly what Paul Regan's The Forensic is. It reads like a well-conceived mystery novel, but details a true story of intrigue, criminal activity and obfuscation of the law. When the facts of the fraudulent financial activity are augmented with the mystery of Howard Hughes' clandestine lifestyle, the story rises to the level of a thriller. Regan has taken what is usually a boring subject and turned it into a very exciting read."

"A fascinating, real-life tale of old Hollywood glamor and CIA intrigue. This period of US history has always fascinated me and learning about the details of Howard Hughes and his very own spy games drives home how influential Hughes was. A flawed, but charismatic man, Hughes has captured many people's imaginations, and the author uses that fact to weave an engaging retelling of events. Most importantly, Paul Regan bravely pursued justice and made it so money couldn't buy a billionaire out of his problems.

"The Forensic reminds financial enthusiasts the vital role that scrutiny, the process of checks and balances, must play, in opposition to the myopic worship of wealth."

"Every sentence has the reader asking herself 'what's next' as the details come to light of a virtuous CPA and his path that crossed Howard Hughes. Coupled with fascinating historical facts that paint a detailed picture for the reader, this story keeps you on the edge of your seat and constantly rooting for the success of Paul Regan, who knew little of what this mission would encompass when he first encountered the bombastic and greedy Hughes."